The Ultimate Fantasy Hockey League crowned its inaugural playoff champion on Monday night, with Ashley Murray and the Monarchs capturing the Klein Cup in convincing fashion.

Ashley celebrated the lopsided victory over Strong Island in her hometown of Regina, Saskatchewan, surrounded by family — including her father-in-law Al Murray, who became a Stanley Cup champion on the same night as assistant general manager and director of scouting for the Tampa Bay Lightning.

“Super excited,” Ashley stated on the UFHL’s Telegram chat as she was showered with congratulatory messages from her fellow franchise owners. “As excited as I am for this Klein Cup, I have to say I’m more excited for the Tampa win for my father in law! There was definitely some champagne popped and tears cried — by my mother in law, not Al. He was ecstatic though.”

Not surprisingly, the Monarchs were led by several Lightning stars, including Conn Smythe winner Victor Hedman, NHL playoff scoring leader Nikita Kucherov (pictured below with Ashley and her son) and leading goal-getter Brayden Point, who was on loan from the Red Army franchise through the UFHL’s innovative playoff format. 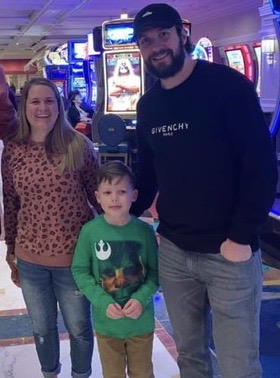 Point was Ashley’s first-round pick (seventh overall) in the UFHL Playoff Draft and she followed up with Miro Heiskanen in the second round — the Dallas defenceman and breakout sensation who finished third overall in playoff scoring behind only Kucherov and Point. Yes, the Monarchs were rostering the top three scorers from this year’s NHL playoffs and four of the top five with Hedman finishing fifth.

Heiskanen was on loan from the Bombers, but Kucherov and Hedman will continue to lead the Monarchs into next season as they attempt to defend their throne during the 2020-21 campaign.

Ashley admitted in her recent appearance on the UFF Sports Podcast that Al Murray had a helping hand in selecting the Monarchs’ playoff roster and also tipped her off to avoid Steven Stamkos, who was taken by the Titans at fifth overall — two picks before Ashley took Point. The Monarchs defeated the Titans in the conference finals after knocking off the regular-season champion Grizzlies in the second round and eliminating the Yetis in the first round.

The Monarchs entered the UFHL playoffs as the fourth seed from the Legends Conference but emerged as the Klein Cup favourite thanks to being loaded with Lightning players — boasting nine Tampa skaters on their 23-man roster, six of whom are full-timers for the Monarchs, plus three loaners.

Strong Island, the second seed from the Allan Conference, fell just short for new owner Terry Webber. It was a strong run for Strong Island, who previously prevailed over the Battlehawks in the opening round, the third-seeded Tornadoes in the second round, and the top-seeded Defenders in the conference final. Strong Island was backstopped by Anton Khudobin and powered by Corey Perry, who scored the overtime winner to prolong the Stanley Cup Final.

Terry took the loss in stride, swinging a blockbuster trade to celebrate his ownership by landing Rasmus Dahlin from the Royals in exchange for Jacob Markstrom, Ryan Pulock and a second-round pick (61st overall). Terry will now be building around Dahlin and Andrei Svechnikov, the first and second overall picks from the 2018 NHL Draft, for Strong Island’s future.

The present spotlight belongs to Ashley and the Monarchs, who won with 15 of their own players as well as eight loaners. In addition to the Klein Cup, which will be awarded to Ashley in person and stay in her possession throughout the offseason, Ashley also earned a total of $750 USD in prize money.

That included $390 as Klein Cup champion (50 per cent of playoff purse), $255 for her players’ contributions to the championship (each player on the Monarchs’ 23-man roster received a $17 payout to account for the other 50 per cent), a $5 bonus for Hedman winning the Conn Smythe Trophy as NHL playoff MVP, and another $100 for finishing first in the UFHL/NHL Playoff Pool.

It was a clean sweep for Ashley, who came from behind to win that playoff pool as the only entrant to correctly predict both the Stanley Cup and Klein Cup champions prior to the playoffs. Those bonus points propelled the Monarchs to the top of the standings among 23 entrants.

The Monarchs won the Klein Cup with the following 23-man roster:

Those eight loaners, listed in the order that they were picked in the UFHL Playoff Draft and each earning $17 payouts for their regular franchises in parenthesis, were replacing these Monarchs players who missed the NHL playoffs:

Here were the final standings for the UFHL/NHL Playoff Pool, with those results available here:

22) Snipers (Juha Soudunsaari) = 45 points (did not enter fourth round)

That concludes the inaugural UFHL season, with the Entry Auction as the next event on the calendar — slated for Saturday, Oct. 17. Here is the draft order:

1) Red Army (from Vengeance via Royals)

5) Red Army (from Blades of Steel)

10) Titans (from Royals via Grizzlies)

24) Grizzlies (from Rock Republic via Titans)

48) Brutes (from Stallions via Norse Stars)

53) Royals (from Duckman’s Domination via Grizzlies)

59) Monarchs (from Titans via Grizzlies)

The franchises from 16-29 were eliminated through the first three rounds of the Klein Cup playoffs and were placed in reverse order of their regular-season standings following each round. The Klein Cup champion is slotted 31, with the runner-up at 30.